This past weekend I had the privilege of attending my first writing conference.  It was a lovely and inspiring time to learn from amazing faculty, and was capped by a stirring keynote address from author of the #1 New York Times Bestseller WILD, Cheryl Strayed.  All of our fabulous instructors (heartfelt thanks to Suzanne Finnamore, Ariel Gore, Theo Nestor, and Candace Walsh) freely bestowed so much collective wisdom, honesty, and generosity throughout the weekend that part of me did not want the weekend to end.

But one specific part of me was begging for the conference to be over.  My poor note-taking hand was seriously hurting and kept going numb from all the collective notes I was furiously scribbling throughout the weekend.  It’s been awhile since I’ve taken substantial handwritten notes, and I didn’t realize how terrifically out of shape my hand was!

I had finally found my tribe, a group of supportive, bookish folks all keen on improving their practice in the “craft of writing.”  And I wasn’t about to let this golden opportunity pass without taking a ton of notes.  Which also got me to thinking about how the profoundly physical act of writing down ideas is so integral for many of us to the process of digesting, understanding, remembering, and passing on information.  I don’t remember anything unless I write it down somewhere, as I’m cursed with a terrible short-term memory.  So if I want to have a shot at remembering anything (good writing tips and practices, sage advice, etc.) I have to write it down… immediately!  Otherwise whatever idea or concept introduced instantaneously evaporates into ether.

I also happened to notice that most of my fellow retreat participants fell into three main categories when it came to taking notes: 1) the Keyboarders, who efficiently tapped out notes on their laptops/tablets/iPads, etc; 2) the pen and paper Scribes like myself, furiously scrawling through hand-cramps; and 3) the Absorbers, folks who simply leaned back and listened most of the time during the workshops and speeches, and who only jotted down stuff during specific writing exercises, etc.

I’ve tried being a Keyboarder, but it doesn’t work for me as I find the overwhelming temptation to simultaneously edit typos as I’m jotting down notes too hard to resist.  I lose my train of thought and miss whatever idea the speaker is trying to convey as I’m busy deleting something.  And just how do the Absorbers do it?  Either they’ve been blessed with photographic recall, or they just take much more efficient notes.  (My guess is they’re probably the later.)

As a messy Scribe, I usually require a large college-ruled notebook to contain my frenzied handwriting.  Most people have a hard time deciphering my handwriting, which probably explains why I did well in blue book exams in school, as the TAs probably had no idea what the heck I was writing, and gave me the benefit of the doubt.

I still prefer to take substantial handwritten notes in a large spiral notebook with the spirals at the top, conveniently out of my frantic right hand’s way.  But my one exception is the Moleskine notebook.  And I certainly spotted quite a few of the svelte black notebooks this past weekend at the retreat.  (I brought mine too, but kept it mostly hidden it in my room.)

Writers seem to like their Moleskines as much as innovative eye wear, coffee, and alcohol—and no wonder with the notebook’s self-proclaimed associations with Wilde, Hemingway, and Picasso.

I bought my first Moleskine in 2006 at a Dymocks in Hong Kong.  And I remember at first only wanting to jot down notes in pencil so that I could erase typos and misspellings.  (After all, it was expensive bound Italian paper!)  I’ve since gotten over it, but for me, this small black notebook symbolized what I aspired to be: someone who noticed things and who wrote them down.  I wouldn’t go so far as to call myself a writer (unless you count mind-numbing credit research reports that no one ever reads) but my little black Moleskine represented the association of writing with romantic notions like travel and adventure, departure and arrival.

Fast-forward to today’s financial headlines.  Upon returning from my writing retreat (where I spotted more than a few of the iconic notebooks in addition to my own,) I learned the news of Moleskine’s upcoming debut IPO in April.  It appears that I’m not the only one that subconsciously associates my little black notebook with a sense of history, art, and romanticism.  Moleskine is actually being marketed as the opposite of a typical stationary company—and rather as a luxury brand that sells “identity and culture.”  (Thanks to Quartz and the i-bankers for the nifty chart:) 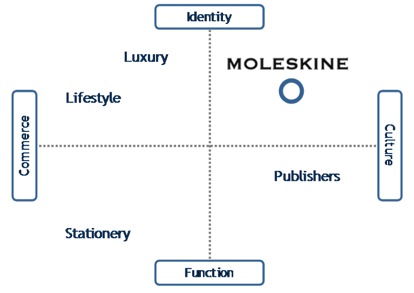 And as of yesterday, there’s been enough interest in the offering which could value Moleskine at up to €560 million ($722 million) despite questions about the inherent strength of the Italian economy.  I guess the i-bankers aren’t only just selling Moleskine’s IPO like any other luxury brand, but also linking it to the rise of the global citizen, given the brand’s borderless and “undefined national identity.”

Either way, it’s just a notebook.  But I still have a hard time writing messily and freely in it versus my regular “utilitarian” spiral bound notebook.  While my little black Moleskine will always remain my “nice” notebook, I guess I might just start calling it my “luxury” notebook from now on.

So yeah, I probably won’t be taking messy notes in it either since I’m definitely hanging onto my trusty spiral-bound.  And I’m still waiting for extreme note-taking to count towards my weekly cardio requirement.

A special shout out to all the instructors and participants at last weekend’s retreat:  Thank you!  May you be inspired and invigorated as I was.

← A Pack-Rat’s Philosophy
Spring in the Quad →