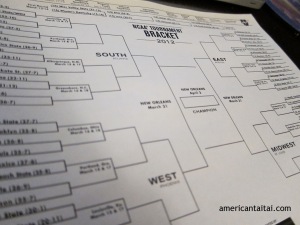 With Selection Sunday just behind me and hours of productivity lost to ESPN and CBS Sports, I’m reminded that the month of March represents much diversity in the world of sport, particularly in different parts of the world.  The sports we follow and the teams we cheer for reveal some of our individual identities: particularly our nationalities and geographical affinities, and sometimes even our educational and social status.  Soon I will be watching TV highlights of last-minute amazing wins and unlikely Cinderella teams upsetting perennial highly seeded favorites, but what does that really say about me?

While more universal topics for March include themes of spring and rebirth, if you consider yourself any kind of “patriotic red-blooded American,” March is the month that contains one of the most major significant American sporting events: NCAA March Madness. “March Madness” and “The Big Dance” are terms used to describe the annual NCAA Men’s Division I Basketball Tournament selecting the top 64 college teams to participate in a bracket tournament to determine the year’s NCAA Division I Men’s National Champion.  For most of us in the States, making your bracket picks this time of year is probably either: 1) a sacred annual ritual (even President Obama makes his selections public every year); or 2) an annoying nuisance, since everyone else is so preoccupied with the college basketball tournament.

As my sports-crazed nation is now fully enthralled and in the throes of bracketology science, Vegas odds, and competitive office pools, I’ve thought back on how I’ve always been a joiner growing up. I’ve always wanted to fit in and to be truly American.  While I was born in the US, I don’t really look like your archetypical, patriotic, red-blooded American.  I’m a Chinese-American woman and I’ve filled out an NCAA bracket almost every year for the last 25 years.  Go figure.  I recall my first bracket experience in a seventh grade Civics class back in Pullman, Washington.  Our teacher, Mr. Busch, would read out all the tournament bracket teams and their seeds from the Spokesman Review and the entire class filled out individual brackets including Sweet Sixteen and Final Four selections in our spiral notebooks.  I don’t know what filling out NCAA tournament brackets had to do with Civics, but everyone in the class participated with ample enthusiasm.  Maybe that’s a large part of Civics and citizenship: being a good sport and joining in, even if you don’t have any idea what is going on.  And for whatever reason, every year since the seventh grade, I’ve kept up the tradition and have either filled out my tournament bracket on my own or joined in a pool.

I’ve just finished filling out my 2012 NCAA tournament bracket and am reminded that this ritual is truly emblematic as a rite of passage for many Americans, young and old, and particularly for those of us who normally don’t obsessively follow NCAA basketball or watch much ESPN.  And if you are working in a US office anywhere in the world, you will probably get hit-up and/or coerced to join the office pool.  Otherwise, you risk being ostracized and banished from the water cooler banter and ensuing trash-talk.  My advice: Unless the cost is outrageous, don’t be a hater.  Just do it and join the pool.  Play nice with others.  It might even be kind of fun.

I’ve also found that this camaraderie and dynamic around sport in the work environment to hold true in other parts of the world too.  Exactly five years ago, I was working at a European investment bank in Hong Kong.  I was the only American in our group of Aussies, Brits, and Canadians.  I had literally just printed out my 2007 ESPN tournament bracket and was filling it out at my desk when my boss’s boss, Michael, walked over to me.  I froze.  Michael didn’t usually talk to me, so either I was in trouble or something really important was happening.  He strode up to me, eyes intense.

“Right, Angela, so you’re joining in the pool, eh?”

“Um, yeah, sure of course, I’m just filling out my picks now,” I nervously stuttered, as I showed him my tournament bracket.  I was shocked that this Aussie followed American collegiate basketball, especially because it’s impossible to watch NCAA sports in Hong Kong.

“What’s this?” he asked looking puzzled.

“Uh…  My bracket picks.  Hey, what pool exactly are we talking about here?”

“Come-on, Angela, the Cricket World Cup!  Get with it!  You’re such an American.  It’s only the biggest sporting event every four years outside the FIFA World Cup and the Olympics!”  As he emphasized the word “American” he squished his nose with disgust.

“Terrific, so I’m in charge of the pool.  Just tell one of the analysts what country you’re going with and you can pay me later this week.  Everyone, except your boss, is joining the pool, but I didn’t ask her, because I don’t think she’s interested in sports.  However, I thought you might be game.”

So I handed over my HK$500 to him then and there and told one of the analysts I was going with Bangladesh.  Needless to say, I quickly lost my HK$500, but it was a terrific experience and it felt so good as a girl to be included as “one of the guys.”  Call me insecure, but this girl thought the HK$500 was well spent.

Which brings me to one last topic related to March Madness, Hong Kong style.  As a self-loathing American, who has lived and worked in the I-banking industry in Hong Kong for almost seven years, I’ve noticed a latent, but palpable “good-ole boy” network at play, just as in any other industry and in any other country.  While it’s hard for me to speak about it as an insider, I’ve personally witnessed the transformation that takes place when two male colleagues converse about “the big game last night.”  Yes, it’s all just small talk, but outside of national pride, sport is a universal language.  You learn quite a bit about someone when you find out they cheer for Man U verses Arsenal, much like how we categorize people based on whether they are Giants or Jets fans.

Growing up in the US, I mostly learned about football, baseball, and basketball.  I picked my favorite teams.  I lived through seasons of mostly heartache and fleeting moments of bliss.  But when I left the States, I also learned that the rest of the world follows a different football—what we call soccer in the States, in addition to many other sports that are the predecessors of popular American sports.  I find it fascinating that American football evolved from rugby, and that baseball evolved from cricket.  But given Hong Kong’s history as a former British protectorate, there is a clear slant towards popular Commonwealth sports, which are generally favored on television.  So, if you’re a sports fan in Hong Kong, your viewing choices are limited to watching: NBA basketball, UEFA Champions League football, or some sort of Rugby or Aussie rules football.

It is a wonderful thing to learn about sport in the context of culture, and living in Hong Kong has broadened that aspect for me.  One of the biggest annual sporting events I’ve ever experienced in Hong Kong is the Hong Kong Rugby Sevens, which takes place every year inside Hong Kong Stadium at the end of March.  Tens of thousands of fans from all over the world converge upon Hong Kong one weekend in March to watch their teams play.  The atmosphere is electric and the excitement spills over everywhere, much like the Pimm’s No. 1 and beer spilling out from all over the South Stands of the stadium where the most lively and costumed fans congregate.  I’ve never seen anything like it, and I don’t think I’ve ever seen such a concentration of studly, neckless physical specimens in tight rugby shorts and striped shirts gathered in such numbers.  Oo-la-la, it is truly awe-inspiring.  But most impressive are all the fans who come out to enjoy the day, fans who are generally good-natured, well behaved, and willing to teach any newcomer all their songs and chants.  The entire crowd sings along, and the day is good old-fashioned fun.  There is something we can all learn from that.

To confess, I still don’t have a good idea how to keep track of rugby trys and cricket wickets, so I’m sticking with my NCAA tournament bracket this March, as well as my red-blooded American football and baseball.  I like the overhand throw and the forward pass.  It’s more exciting to me but maybe I’m just too old to learn a new sport.  But I’m grateful to have experienced a few new sports outside my comfort zone amidst a culture slightly different from the one I’ve grown up with.  And isn’t that the point?  Sometimes you have to take the girl out of America to show her how American she truly is.

← Ten Minutes
12 Years On: A Few Thoughts on Goldman Sachs and Greg Smith →