Last week, some good friends generously treated DH and I to a double date at an intriguing restaurant north of Seattle called the Grouchy Chef.  It was a totally unique and new dining experience for me because never have I seen one man run an entire restaurant.  And by one man, I mean in addition to being the chef, sous-chef, and pastry chef, he was the host, the waiter, the cashier, and the busboy.  Everything was absolutely a one-man show.  And this wasn’t a food truck or a small food stand by any means.  The restaurant had a proper sit down dining area with nice crystal and china, and could seat around 15-20 people at once.

I mean, even the Soup Nazi on Seinfeld had it easier.  Yes, I know it’s TV, but all the customers took their soup to go, and the Soup Nazi had a whole line of staff to help him prepare his soup, take phone orders, and to collect the money (or snatch back the soup from unworthy customers like George!)

Not this guy though.  Chef Masumoto is the sole owner/employee of the Grouchy Chef, but I don’t think he was actually grouchy.  I suspect he probably has a severe case of OCD or germophobia (plastic on everything, don’t wipe your mouth on the cloth napkins but the paper ones, no lipstick, and use the bathroom when you need to blow your nose.)  But despite this, he still wants to prepare good food for people.  He supports worthy causes.  In lieu of gratuity, he encourages customers to donate to cancer research, and he will feed veterans for free.  I found out later that Chef Masumoto used to operate the Grouchy Chef in a strip mall, but too many people would just randomly walk in without a reservation.  And so he moved to a quieter industrial location where he’s better able to serve a terrific dinner for a reasonable price by reservation only.

If you’re just one person running an entire restaurant, I can understand how you have to be organized, efficient, and well planned.  The whole operation has to be a fine-tuned formula, hence no compromising on customer requests by order.  Doing so would result in a logistical nightmare for this one-man show. 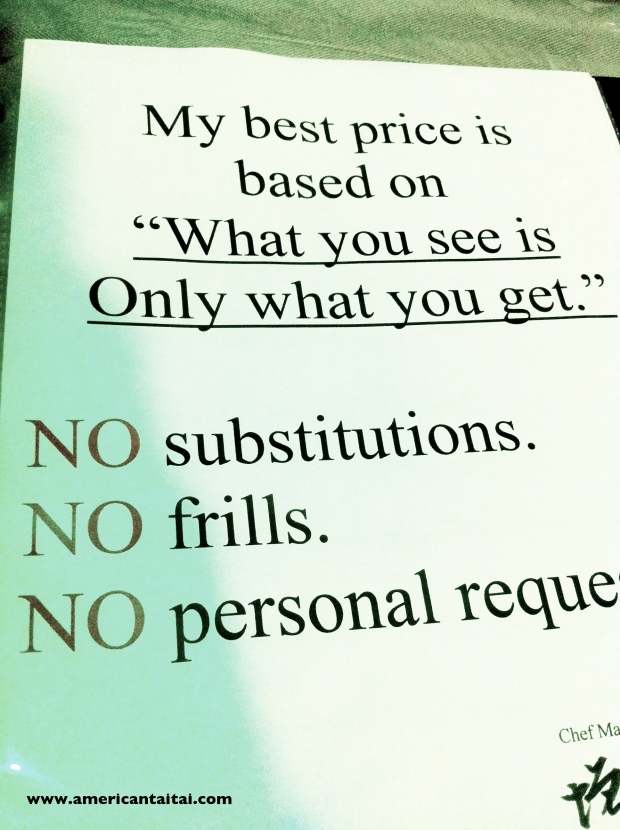 The dinner was excellent.  As we were leaving, I peered into the open kitchen and there was Chef Masumoto, the lone person under the fluorescent lights, working away clearing up and prepping for the next day.  He’s open for dinner seven days a week.  I’m guessing the Grouchy Chef probably knows he can’t work with anyone else, and so he doesn’t have any employees to manage.  He must have some crazy, unquenchable internal drive because running a restaurant is really hard work.  But running a restaurant and doing everything on your own and from scratch seven days a week must border on total exhaustion.  I can’t think of a good reason why he continues to slave away with such passion, other than he must really have a love for it.

The Grouchy Chef experience isn’t for everyone.  Those of you who expect and pay a high premium for outstanding service and ambience when you dine out (and who are bad at following directions) probably won’t enjoy it.  But the fact that one person is serving you a four-course meal for about $25 is nothing to be grouchy about.

The Grouchy Chef is good at what he does, but he will never be very popular.  In fact, being popular would pretty much kill his niche business, as he’d have to expand, hire and manage staff, raise prices, and likely compromise considerably on the absolute and total control he has over his current business.

After dinner we went back to our friends’ home nearby to chat and digest for a bit.  We continued our conversation on all sorts of topics from creative thinking to how to source and organize good and useful information.  Upon leaving for the evening, this very generous couple lent us their copy of Scott Berkun’s latest book, Mindfire: Big Ideas for Curious Minds.  I hadn’t heard of Scott Berkun, the best-selling author of The Myths of Innovation and Confessions of a Public Speaker.  Berkun is also a prolific blogger and public speaker, and I didn’t know he lives in Seattle. 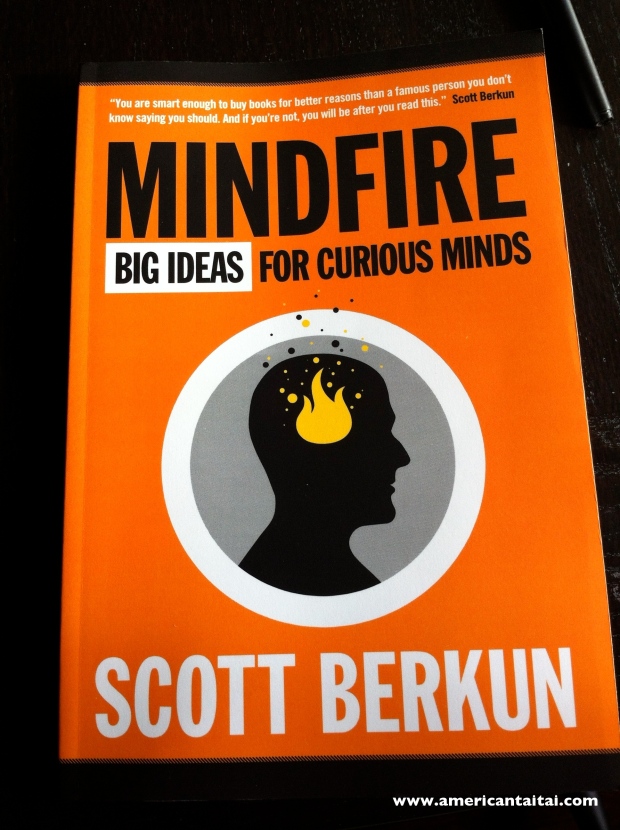 After we got home, I started reading Mindfire, and I loved it.  In particular, I really enjoyed one of his essays entitled, “Should You Be Popular or Good?” (You can read an earlier version of this essay on Berkun’s blog from the hyperlink, but the version in the book has been edited.)  In this essay, Berkun touches upon a fundamental but subtle distinction that we often blur in our modern world of pop culture and Twitter followers: In the creative world, being popular doesn’t equate to being good.  Sometimes the two circles may overlap, but he rightly argues that there is often a difference between the two, and that being one does not necessarily lead to the other:

The temptation many creative people I know have is to strive for popularity. To make, do, and say things that other people like in the hopes of pleasing them. This motivation is nice. And sometimes the end result is good. But often what happens in trying so hard to please other people, especially many other people, the result is mediocre. Their internal goodness detector is disappointed with what they make. And worse, sometimes the results are awful. Popularity often comes at a price: going for bland, crass, predictable and meaningless, instead of interesting, delicate, complex and meaningful.

But what most creative people want, all the ones I know, is to be both good and popular. They want to achieve their own sense of goodness, while at the same time pleasing other people. It’s a tightrope. Especially once you’ve been popular here or there, people tend to want more of the same. And that rarely fits in with a creative person’s sense of goodness.

Berkun ends his essay with a profound but practical conclusion: “I want to be popular enough to succeed, but I also expect to fail occasionally if I’m following my own compass for what is good.”

In fact, often times striving for one may very well exclude the other, as in the case of the Grouchy Chef.  He is good, but he’ll never be popular.  And I’m sure we can think of many examples of current wildly popular fads, trends and artists who might not necessarily be very good (insert your choice of current teeny-bopper fad or celebrity here.)

I guess I’m curious.  Are there only two types of people out there?  In the creative and business worlds, is it really a binary system of popular-but-mediocre compromisers versus temperamental and unyielding artists, with only a small intersection between the two?  And if that’s the case, how about the intersection of “popular” and “bad?”

Anyways, here’s my feeble attempt to make simple sense of these concepts.  (Note the diagram is not drawn to scale!)

What do you think?  All I can say is that last Friday, my mind and stomach were set alight, and I’m grasping at trying to make some sense of it.