Brunch: Are you Savory or Sweet? 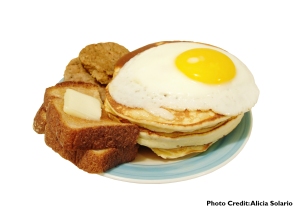 A typical weekend scene unfolded a few weeks ago.  DH and I were getting together with another couple at a popular breakfast spot.  The restaurant was crowded and loud—always a good sign for a local brunch joint.  Chatter and the blissful aromas of good coffee and bacon surrounded us.  We were hungry.

After promptly being shown to our seats, I slid into the inside seat of our four-person booth, and examined the menu.

“Hm… So, what are you thinking about getting?” I asked DH, with a sideways glance, one eyebrow lifted in anticipation.

Ok, slight confession.  I asked him, but my hint and implication was far more precise.  What I really meant was: “I hope what you’re ordering is something I find tasty.  Oh, and we’re sharing, right?”  Presumptuous me.

We’ve been married for over three years now, so DH is well versed in our de facto restaurant discourse. Since our dating days, we usually order different items, and end up sharing when we go out to eat.  This way you get to try not only what you ordered, but something else too.  I’m sure all you non-sharers are reading this with horror and disgust, and I know that sharing isn’t always the classiest thing to do in a western-style restaurant, but I’ll sacrifice a little decorum for variety and to diversify concentration risk.

DH looked at his menu and furrowed his brow.  Then he responded, “I’m looking at the mushroom scramble or the French toast.  What do you think?”

“Hm, I’m looking at the mushroom scramble too.  If you’re in the mood for something sweet, you should get the French toast,” I replied.  “You can have some of my scramble too.”  DH was in good cheer as both his salty and sweet brunch cravings would be satiated.

The other couple glanced up at us and also had a similar same dynamic, one person ordering a savory item and the other something sweet with the agreement to share.

After we put in our orders and the coffee started flowing, we started talking about food preferences.  I discovered that most people usually prefer either salty or sweet foods, particularly during breakfast or brunch.  And this got me to thinking about my own food preferences.

Normally I’m a savory person.  I prefer salty snacks.  Chips are my mortal weakness and I love crispy, deep-fried foods.  I don’t usually snack between meals, but if I do, I’m usually reaching for the chips.  And for brunch, 95% of the time I’m going for something savory with eggs.  I’ll even take my life into my own hands and order eggs benedict every once in a while, despite Anthony Bourdain’s dire warnings in Kitchen Confidential about the temperature of hollandaise sauce and salmonella.

Even Chinese breakfast has a salty or sweet category.  And while I prefer my fresh soymilk slightly sweet instead of salty (salty soymilk has a richer texture, more akin to congee and often comes with similar toppings) I still need something savory.  Otherwise, it’s not a proper meal to me.  Fresh soymilk is still just a beverage in my book.  Hence the need for fried scallion pancakes.  (Salty, fried, crispy and chewy at the same time!  What’s not to love?) 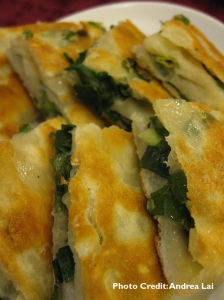 Our brunch conversation got me to thinking more about sweet and salty food, and I wondered if our food preferences say something about us, and whether we are born with these preferences.

Taste is one of our five senses, consisting of four categories: sweet, salty, bitter, and sour.  However, our sense of flavor is a combination of multiple senses, often taste in combination with our sense of smell and touch (texture, temperature, etc.)  Taste is subjective, and obviously, we don’t all like the same tastes and flavors.

So why do some people relish one main taste over the other?  Most research concludes that everyone inherits a unique combination of genes that determines taste sensitivity.  Genes and heredity also determine the number of taste buds we have (Supertasters vs. regular tasters, for example.)

I was curious about the sweet lovers, and I came upon an informative site from TLC that explains why some of us have a natural inclination for sweets.  The site explains that the perception of sweetness has been directly linked to a specific DNA fragment in taste receptor cells, which are found in the intestines and the tongue.  However, some people with a high sugar threshold may actually have a lower sensitivity to sweetness, meaning they need more sugar in foods to get the same satisfaction as those with a higher sensitivity to sweetness.

As for the salt lovers, we might crave salt to mask bad or bitter tastes because salt is known for improving and enhancing other tastes, and for masking bitterness.

Now back to brunch: Truthfully, brunch is not my favorite meal.  But I appreciate the desire to sleep in and for a late breakfast/early lunch, particularly when you’ve been out late the night before.  Food-wise, I’d argue that the two most important ingredients to a good American brunch aren’t eggs or pancakes, but a lot of caffeine or a bit of alcohol—both of which naturally yield more civil and lively conversation amongst friends.  Also, there needs to be socializing at brunch.  A quiet brunch with no caffeine or talking is an utter failure.  You might as well be eating corn flakes alone at home.  Just ask Carrie Bradshaw.  Ok, the girls from SATC aren’t actually eating anything in this brunch scene, but you get the picture.  It’s about catching up.

Outside of catching up with friends (and the bottomless mimosas) we all know that the actual food served at weekend brunches is kind of underwhelming.  Often brunch is a restaurant’s chance to offload any leftovers or whatever they couldn’t sell on Friday and Saturday nights.  You could make most standard brunch dishes at home on your own.  But it’s the social aspect of brunch that makes it a relevant mainstay of the weekend menu.

The term “brunch” was first coined by Guy Beringer in 1895 to describe an ideal Sunday meal in Britain.  In his article “Brunch: A Plea” which appeared in Hunter’s Weekly, Beringer argues for a new Sunday meal:

Instead of England’s early Sunday dinner, a postchurch ordeal of heavy meats and savory pies, why not a new meal, served around noon, that starts with tea or coffee, marmalade and other breakfast fixtures before moving along to the heavier fare?  By eliminating the need to get up early on Sunday, brunch would make life brighter for Saturday-night carousers.  It would promote human happiness in other ways as well.  Brunch is cheerful, sociable and inciting.  It is talk-compelling.  It puts you in a good temper, it makes you satisfied with yourself and your fellow beings, it sweeps away the worries and cobwebs of the week.

I can see the origins of our modern day brunch from Beringer’s quote: breakfast-type foods available later in the day, an excuse to drink a little in the morning with friends over good conversation.  But to me, Beringer’s description sounds like a large and sociable lunch—particularly with its noon start time.  I guess even back in 1895, the primary emphasis of a weekend brunch wasn’t the food either, but sleeping in, and still getting your breakfast fix with good atmosphere and company.

And of course weekend brunch sounds eminently more enjoyable than just “lunch” which is so very Monday-through-Friday and corporate.  We are obligated to “do lunch” but we enjoy brunch.  And so brunch will always be fun and whimsical, so long as there’s good company, caffeine or mimosas, and something savory for me!

One thought on “Brunch: Are you Savory or Sweet?”