The Purge and Brain Attrition 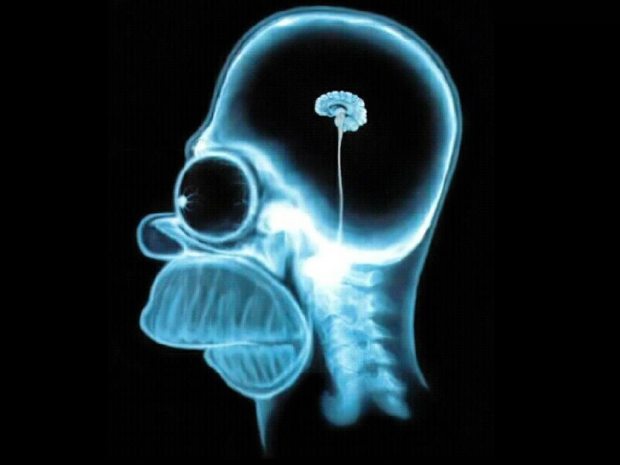 It’s been an interesting week here in American Taitai-land.  My Taitai task at hand was to try to clear out an entire bedroom full of old school files.  Thus much of my week has been spent overindulging in nostalgia as I clear out boxes of my old homework, papers and notes from high school, college, and graduate school.  (Yes, it was a lot of school, and there were lots of notes and paper to recycle.  Let me know if any of you have a good technique to remove metal spirals out of spiral-bound notebooks to recycle without poking your eyes out!) 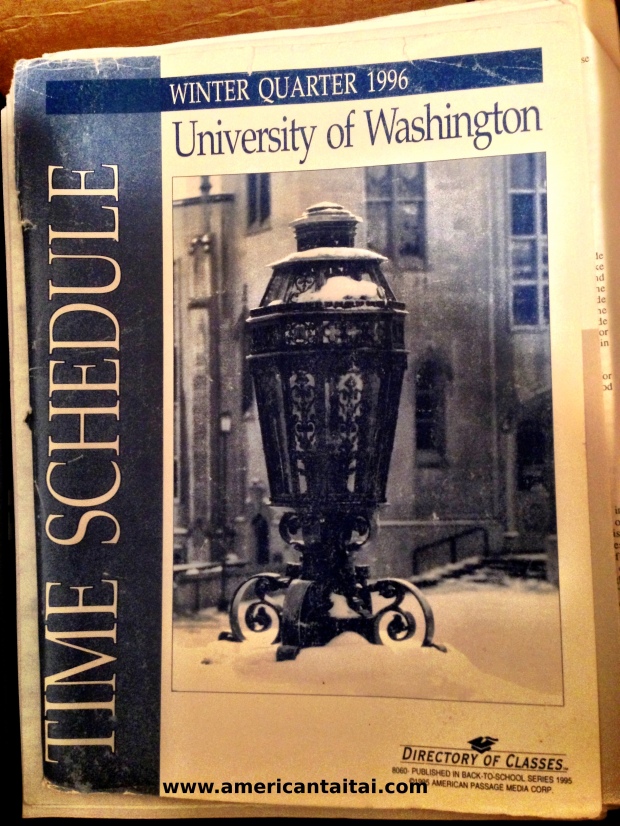 A blast from the past for those of you who remember getting up at 5am to register for classes on the phone, B.I. (Before Internet)

I blame my poor organizational skills on genetics because I hail from a family of packrats.  We are tidy and keep meticulous records.  We also keep those records forever.  Paper was our chief enemy growing up, and I still wage war with it.  All was well and peaceful in our paper-filing kingdom because there was always plenty of storage space.  And despite the fact that I left home at 18 for college and never looked back, I still managed to accumulate endless boxes of paper and notes through adulthood that somehow mysteriously got tucked away in tidy boxes at my parents’ house.

But then my parents retired, moved cities, and downsized houses, forcing me to take back all my boxes that happily sat for years (some for decades!) in their spacious garage.  As DH and I don’t happen to have a garage or a basement (or any storage, for that matter) in our house, one of the bedrooms in our three-bedroom house effectively became my “Junk Storage Room.”  The Junk Storage Room is a consistent theme in my life.  Even as a single expat living in Hong Kong—where space is the ultimate luxury—I still managed to maintain a large bedroom-sized Junk Storage Room full of boxes of stuff I didn’t know what to do with, but couldn’t bear to simply throw away.

Three moves later, The Purge is long overdue, as cleaning and organizing have never been my strong suit.  I procrastinate and get overwhelmed and end up putting off the dastardly task until it is simply unavoidable.  In this cartoon list of hilarious procrastination techniques, let’s just say I’m everything BUT “The Cleaner.”  Besides, I’m writing this blog post when I could be cleaning and organizing!

But now is the time to go through everything because enough is enough, and we desperately need the space.  I’ve never really pined for a garage or inefficient dead-space closets under staircases (the perfect hiding place for boxes of stuff) until this week.

I’ve discovered that I am a neat-but-not-very-organized person, and that there is a subtle but important difference.  Most people assume that I am both neat AND organized.  But I’m actually just neat.  The two don’t necessarily go hand in hand.  I actually have very poor organizational skills because I have a discipline problem with purging.  So long as everything is perpendicular and stacked nicely or tucked away in boxes sorted in right angles, I’m quite happy.  (Incidentally, I’m also very good at Tetris-style box packing and storage.)  I’ve never had a good overarching organizational system to adhere to when it comes to paper, and so I usually end up keeping everything in files and boxes.

But in this week of forced purging and recycling old notes and tests—especially from college—I was consistently amazed and dumfounded at my former brain capacity as a young person.  I mean, all these weird symbols and notes and charts were clearly taken in my very recognizable handwriting—but I have absolutely no effing idea what the heck anything is anymore.  Did I actually LEARN all of this at one time?!  (Well, obviously not very well!)  And yet all of these notes and exams are in my handwriting.  I did well in most of my classes, but I certainly don’t know what anything means anymore.  It’s all gobbledygook now and might as well be an unintelligible alien language since I clearly understand nothing now that I’m a stupid grown-up middle-aged adult. 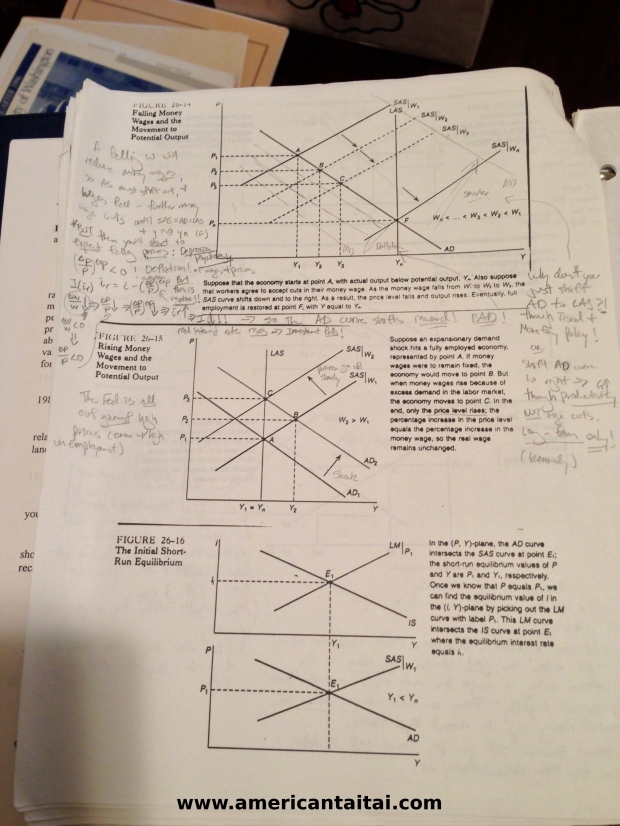 Hm… There is some vague understanding… but this was my major?!

While it’s been both traumatic and disturbing to see the deterioration in my own memory, I didn’t expect to witness the atrophying of my own brain and intellect so vividly.  The other surprise was that I actually seemed to learn (and have now have managed to forget) a heck of a lot of difficult knowledge in college.  The courses I took look intimidatingly hard now, and I’m pretty sure that my current brain is not equipped to handle the same coursework today.  And for that matter, I’m pretty sure I’d struggle with a typical middle schooler’s homework load these days. 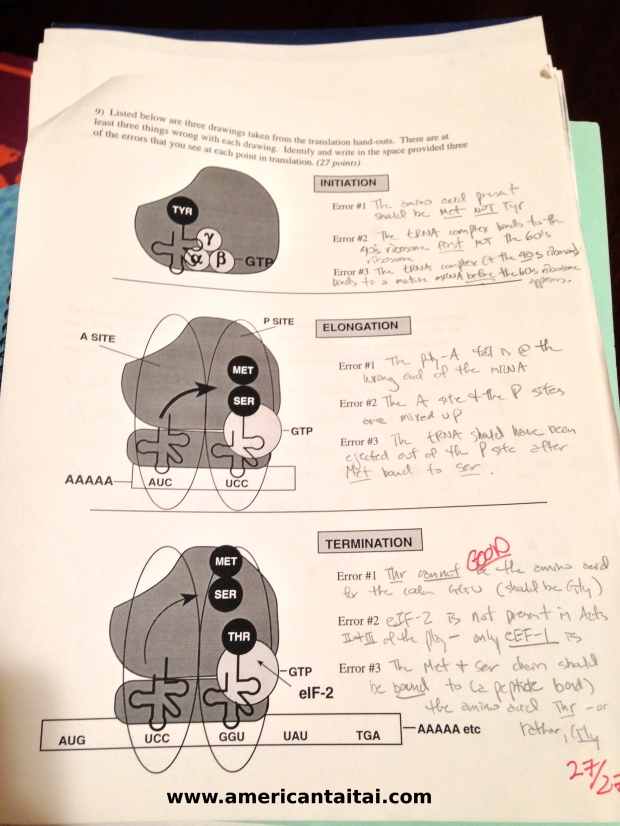 What the heck, did I even TAKE Microbiology? I have the notes and grade from this class, but I don’t actually remember anything!

This experience peaked my curiosity, and so I started looking into how our brains and memory change as we age, and I came across the term “Neuroplasticity.”  I like the definition of Neuroplasticity in this article that “refers to the lifelong capacity of the brain to change and rewire itself in response to the stimulation of learning and experience.”  The article goes on to describe how aging affects this process:  “As we age, the rate of change in the brain, or neuroplasticity, declines but does not come to a halt.  In addition, we now know that new neurons can appear in certain parts of the brain up until the day we die.”

I guess that’s why it’s harder for us older, middle-aged dogs to learn new tricks and concepts.  I suppose I shouldn’t feel too terrible since I never consistently used many of the concepts or formulas that I learned in college.  So of course my brain simply purged unused esoteric concepts to make space for more practical things that I actually use on a daily basis, much like my current physical purge of paper.  An aging brain changes in its cognitive functionality, though there seems to be a lot of variability among different people.

And then there is the fallibility of memory.  Our memories fool us and we often misremember things without realizing.  It’s called Reconstructive Memory.  Instead of a full video replay of a complete, coherent, and truthful account in our minds, our memory only recalls bits and pieces, and our impressions are often distorted by perception and prone to errors.  I recall a lot of the fun parts of my college days, but I’ve since forgotten much of the not-so-fun and stressful cramming sessions before exams and papers.

So what are some of the upsides of aging?  Our brains shrink and our hair turns grey, but what do we gain?  Wisdom?  Experience?  Senility?

A couple of sources sum it up nicely.  In exchange for getting older, here’s what I might expect to gain, if I’m lucky:

Even Oprah sums up the virtues of aging into 10 observations:

1. Your hemispheres sync up.

3. Your reasoning and problem-solving skills get sharper.

4. You can focus on the upside.

5. Your people skills are constantly improving.

7. You’re always adding to your knowledge and abilities.

8. You can see the big picture.

9. You gain control of your emotions.

10. You become an instant expert, even in new situations.

I guess these lists sum up a few of the mental benefits of aging nicely.  Let’s call the whole lot an offshoot of Wisdom.  But that still doesn’t allow me escape from my task of physical purging.  I guess I shouldn’t feel too bad.  Purging every once in awhile is a good and necessary thing.  I just didn’t realize that our brains do it all the time, and with such great efficiency that sometimes we don’t remember anything at all.

I suppose following my aging brain in the physical sense and purging earlier and more often can actually be a good thing.  So it’s back to the grind for me.  Wish me luck with the paper cuts.

← What Are They Thinking?
Irrational Fears →

7 thoughts on “The Purge and Brain Attrition”